An Anatomy of Chaos – Succeed by X

This is the third article in a series explaining chaos bag mechanics, and how various archetypes manipulate them with different flavours of what I’m calling Bag Shenanigans or BS for short ????

Here we look at cards which trigger off passing tests by a certain (excess) amount, sometimes referred to as “Succeed by 2 stuff”, though really succeed by X might be fairer as not everything works of the 2 above line. Here we look at a few ways these can be used well, and some playstyles in the Rouge faction where they are most common.

If you are a new player interested in Winifred Habbamock, this will be very useful to you (though read the basics article first).

Succeed by X: The Basics

Succeed by X cards add little additional zones with bonus effects within our pass zone, a bit like a critical hit mechanic (details of how these diagrams operate can be found in the basics article). 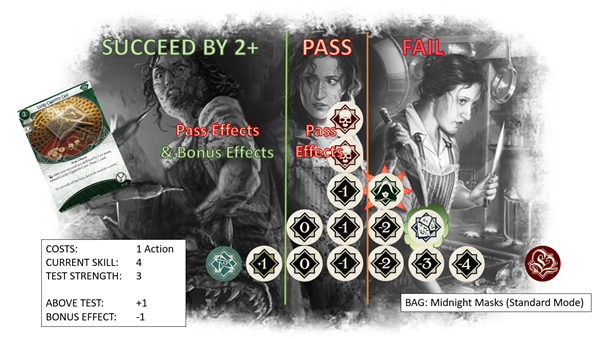 As we see above, if we are targeting our pass line at the usual 2-3 above test strength, the probability of getting the bonus effects is usually too unreliable to plan our turns around. For economy/draw based reactive effects, where timing is less critical, and we can just let them periodically trigger. Especially if we are simply taking a lot of actions (as rogues often can).

Unfortunately, this approach is less practical for a lot of the stronger tools which have to be committed to using upfront. To use these we are going to want to boost much higher, and possibly stack multiple effects into a single test to get enough value back to justify the considerable expense of the excessive boosting. However, before looking at how we might do that, it is worth noting a few spin-off benefits. 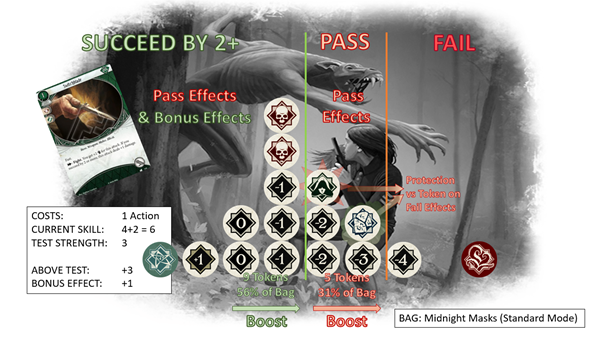 As usual, skill boosts (or test strength reductions) move all zones to the right. While we may have been boosting to position the succeed by X zone where we want it, we also extend our regular pass zone and lowering the odds of actually failing the test.

This protects against on fail effects like symbol tokens, retaliate, alert, and Haunted, and since most of succeed by X effects are self-initiated, it usually means you take less hits in the investigator phase. This can help to save back spare horror from willpower checks in the encounter as so many rogues have low will and these are often associated with horror hits.

Avid readers may notice this mirroring the Hedging Survivor BS architypes in the previous article who take additional hits in the investigator phase offset by mythos phase protection. 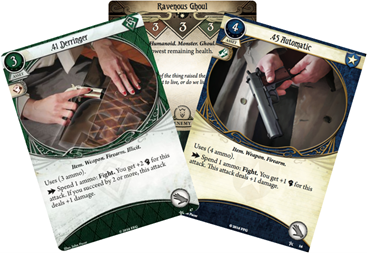 We can also use the regular pass zone to enable less wasteful plays by transferring effort put into a test between extra bonus effects and increased accuracy. For example, the .45 Automatic would usually need 2 actions to defeat 3 health enemies, as would .38 Derringer. However, the Derringer offers a higher skill boost, and does this with at least 1 pass and 1 succeed by 2, while the Automatic is overkilling the enemy by 1 damage on the second attack. Importantly we make the decision to boost on the second Derringer attack after knowing if the first dealt 2 damage. Simply try for the normal pass first. If we deal 2 damage, keep the boosts for later. If we deal 1, boost the second attack. On all tests the Automatic would have equal or lower pass odds. We have traded our (wasted) bonus damage for improved accuracy through planning.

One option to boost high is to push a single stat to extreme values repeatedly through some combination of high base skill, passive boosts and/or assets with action abilities that include high skill boosting. 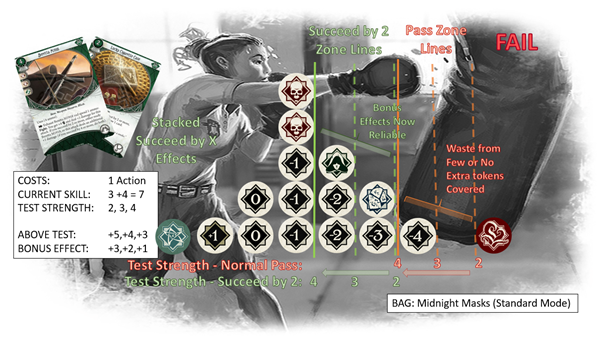 In other builds, this strategy is often used because we plan to use that stat or asset repeatedly, but it can incur waste at the top end of the bag. Most tests in the game so far are around the 2 to 4 strength range, and because we will often find ourselves planning for the 3s and 4s, when we encounter a 1 or 2 (and arguably 3s in some builds), we can end up overcommitted. Succeed by X zone(s) recover some of the lost value from these boosts. Our reactive draw/economy cards trigger almost every turn, and we can use some of the harder to pull off prospectively committed succeed by X effects as well.

If we are using passive buffs to set a high base stat, it is common to also find ways to convert several action types through that stat at the same time, similar to the way mystics convert all their actions through willpower using spells (in fact, some mystic IDs like Dexter or Agnes can reliably trigger a few of the reactive succeed by 2 assets from their off class, like Lucky Cigs or Scavenging, when using spells and high will power). If we are doing this in Rogue however we are more likely to be leaning into Agility or to some degree combat.

Such decks may benefit by leaning into reactive draw and economy more than proactive, or you may aim to use an asset with a high skill boosting action on it early game while building up to a continuous passive high stat and converters later game. 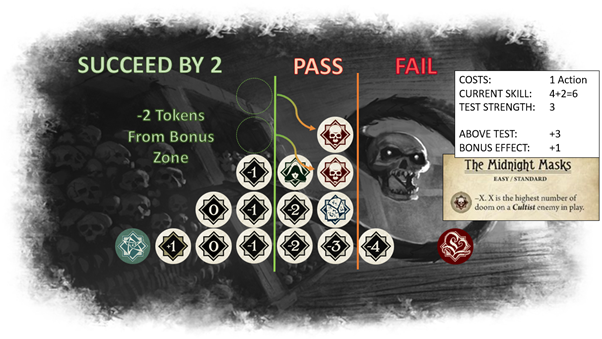 Finally we need to be conscious that passive high stat strategies can be very asset intensive and as usual we need to be mindful that if our deck needs more than 2 or 3 assets in play to get functioning, it may not do so until late game unless we have a gimmick to find them quickly. This is because Skulls tend to move around, and/or escalate over the game. In a campaign we need to plan the deck to work in several scenarios, so we need to have a plan to deal with escalators in particular.

Passing For The Buck

Another option is to look at one shot boosting and, perhaps counterintuitively, cards which offer bonus effects on a pass rather than a succeed by X, particularly draw or other effects which self-replace whatever was spent. 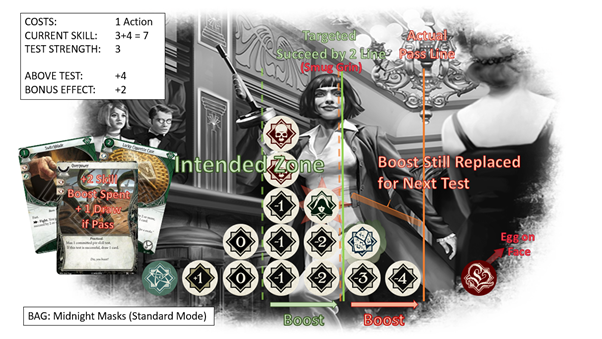 Covering so much of the bag usually comes at substantial expense in terms of committed cards or other spent boosting capacity, and we need a way of replenishing this between tests. Since the pass zone extends beyond the succeed by X zone(s), we are (almost) certain to pass on these tests even if we are only targeting 80% of the bag with a succeed by X zone. By using the pass zone to set up the next test(s), we are not at as higher risk of breaking the chain of successful test the way we might if we solely replenished using succeed by X effects. 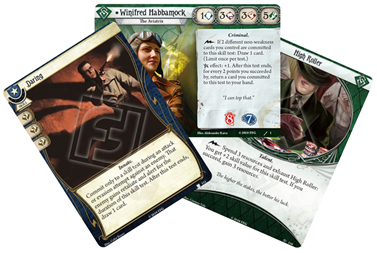 If boosting in large increments the  difference between starting from a base of 3 versus a 4 can become negligible, which may explain why so many rogues have several stats around 3. If these boosts are wild/multi-purpose, they can cover several stats at once turning a middling 3333 statline like Jenny into a flexible all-rounder. Few of these have self-replenishing qualities  noteworthy exceptions include Daring and High-Roller) so it is usually wise to pair wild boosts with other mechanisms that replenish them, such as Wini’s reaction ability, and/or reactive succeed by X draw and an over-boosted stat (perhaps fuelled by something like lockpicks or Barretta).

How high to push the succeed by 2 zone and how many effects like bonus damage or clues to aim for as usual depends on circumstances. If you are new to the game and trying out the succeed by 2 builds, then similarly to my advice for normal test taking, just aim to cover 80% ish of the bag with the succeed by 2 zone like we have in the diagrams above. Then let your intuition develop with practice and you`ll get used to adapting it.

Finally, when using tests to chain into boosts for the next test, it is important to note that you don’t have to put everything into one test. The auto-fail is usually 5-6% of the bag (plus occasional -4s/5s etc which might not be passes on high strength tests) and will likely interrupt your chaining at least once or twice a game. Unless your test is particularly critical, it is usually better to keep a little something back (if you can spare it) to kickstart your engine again. Also keep an eye on whether you need to draw or not since you will have to discard back to 8 in upkeep anyway. This is another reason you might want to consider a hybrid approach using that lockpicks & lucky cigs as a restart button even in an event and/or skill focussed card build. 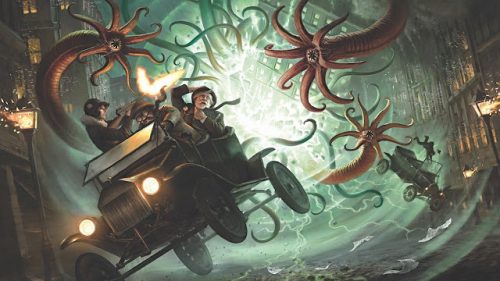 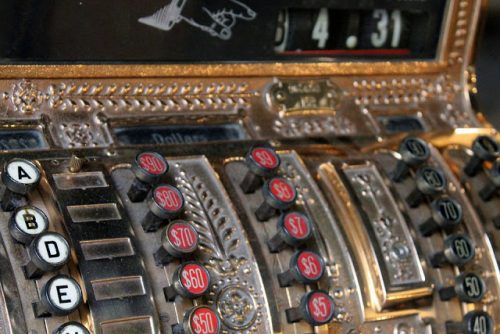