This is the second article in a series explaining chaos bag mechanics, and how various archetypes manipulate them with different flavours of what I’m calling Bag Shenanigans or BS for short 😉 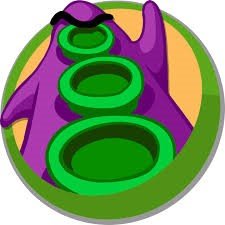 The same way a gambler hedges a bet, so any losses on one are more than offset by the benefits of the other, certain cards can be used to “Hedge” the chaos bag. Here we look at a few ways these can be used, and their implications for some playstyles in the Survivor faction.

If you are a new player considering playing as Stella Clark, this will be very useful to you (though you will want to read the basics article first).

The simplest hedging cards trigger on any fail effect, and they basically work by adding benefits to the fail zone of our diagrams (Details of how these operate can be found in the basics article if needed). 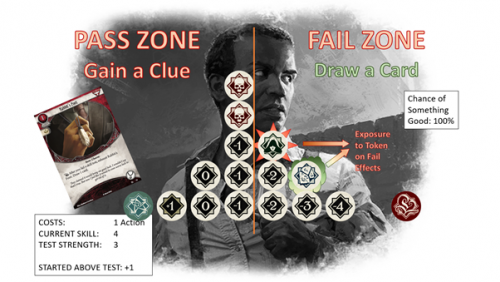 The first thing to notice is that 100% of the bag offers some sort of benefit. This leads to a fast and reactive playstyle where you know things will generally be positive even if you don’t necessarily know how they will pan out. The skill is then in balancing the long-term trend rather meticulous planning.

The second thing to notice is that you are exposed to various things that can trigger if you fail a test, mainly: retaliate, alert, haunted, or token effects. Importantly since most of these relate to self-initiated tests in the investigator phase, the player is in control over the risks they take. Survivor also has access to cheap and/or recurring soaks and plenty of will and agility boosts, which are commonly associated with horror and health hits from encounter cards.

These make them strong against encounter phase shocks saving capacity back to simply weather many of these investigator phase shocks. Be aware some token effects add things like doom or have more impactful effects in certain circumstances, so you need to pick their fights carefully, but it’s designed to be another part of this “roll with the punches” and “thrive under pressure” experience.

Several hedging cards are played after failing by at most a specific amount (usually 2) and offer stronger version of an action that they hedge (like “Look What I Found”‘s bonus clue). This puts a small hedge zone within the fail zone where the benefits are usually higher than passing. 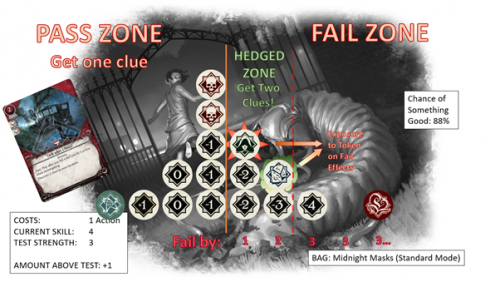 In terms of total bag coverage, this is the same as boosting skill by 2 (which incidentally is the coverage you would get by committing it for its icons – more on this later). Crucially however, we play the card AFTER seeing the token. So if we would pass we keep the card back and get one clue, if we fail by 1 or 2, we can play the card and get 2. Conversely when committing cards to tests we do so BEFORE knowing the result. Which means in order to get this odds improvement we always spend the card.

Reactive cards give us this zone simply by being in hand whether or not we ultimately spend them. Of course, each time we don’t spend them, we get the option to carry those boosted odds into another test.

The probability of getting these extra “uses” depends on what proportion of the bag is hedged. If the zone covers 7 or 8 tokens (50% of the bag), there’s a 50% chance to use it at least twice, and 25% to use it three times. At 4 or 5 tokens (about 25% of the bag) those rise to about 75% and then 55%, and most situations fall somewhere in between these values unless we start to deliberately stretch the zone.

These cards also have a special relationship with cards which reduce test strength since our skill cannot be reduced below zero, which you may recall from the basics article showed that it is impossible to fail by more than the tests strength.

This means that for tests of strength 2 or lower, they can be played on any fail. It also means we can use cards like flashlight, old keyring, lantern, or winging it, to artificially create strength 2 (or lower) tests to turn partial hedges into a full hedges. 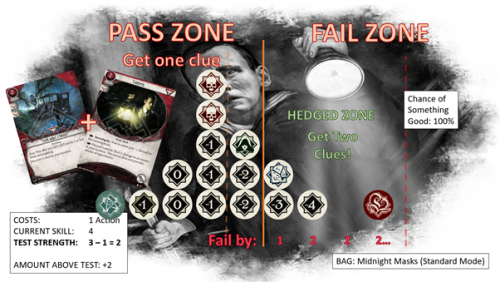 A -1 to test strength allow a “fail by 2 or less” hedge card to guarantee benefits up to test strength 3, and a -2 covers up to strength 4. Since these partial hedges often have strong effects, there are times when you may want to trigger them on demand.

Generally speaking it’s much harder to reduce your skill than boost it, which means this technique benefits from maintaining a low or middling base skill of about 2 or 3. Essentially this pulls the unmodified pass zone to the left, while strength reduction cards pull the limit of the hedge to the right.

Notice that continuous passive +1s to skill like magnifying glass actively work against this method, where temporary or togglable boosts like dark horse, skill cards, or even just opting not to reduce test strength on lower tests, can let you pick and choose your moments and retain access to both techniques.

Control over when to fail can also be key to accessing action compression (getting more back from a given action) in survivor. This is because you can trigger many on fail effects off a single failed action (so long as they all meet their specified criteria) and some of these are committed to upfront. 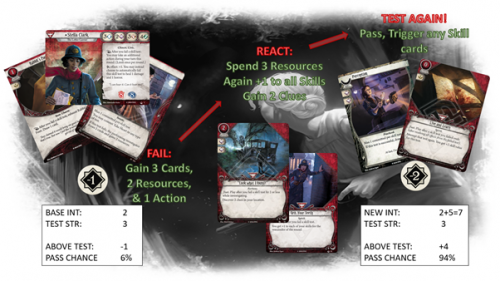 Obviously you don’t need to have as many parts moving as this, two or three of them would be quite a good return on an action spent, but there is a lot of potential to compress multiple effects into single actions. In a faction with limited access to bonus actions this can be very important for overall progress. It is however a card and resource intensive technique which may explain why so many hedging tools include economy effects to let you chain power moves back to back so long as you can weather the hits.

In the times when you don’t want to fail, you also want some nice big multi icon cards to jump up from low stat to high and pass tests when needed, which has natural synergy with the core set skill cards that offer draw on a pass. It may also explain why so many hedging events are also have two matching icons 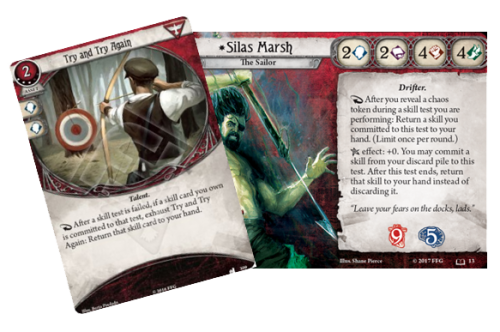 These “go high” cads can even themselves be hedged with certain survivor cards which allow us to commit a card then retract them after seeing the token. These essentially let you decide whether you needed a skill card or not AFTER knowing if it made you pass. And of course a card you didn’t waste is a card you don’t need to draw again!

While stacking continuous passive stat boosts can make plays like this trickier, it is important to note it is possible to play a build which uses hedging tools on some stats and not others. For example, William Yorick may want to use hedging tools on investigation actions with his 2 base intellect and use more conventional tools to monopolise on his combat advantage. The trick is then to look for support and economy cards which synergise with both strategies, like using resourceful on a combat check to return a spent “Look What I found”, or accepting that Live and Learn will be a weaker version of “Lucky!” when used in combat, but potentially a double action equivalent on a deliberately hedged investigation attempt.

Hedging In Other Factions

Finally, the principal of hedging can be used in a more general sense and is available to a smaller degree in other classes. 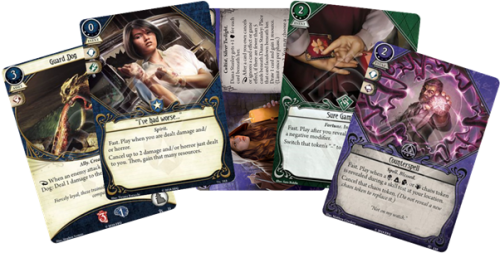 You can sometimes risk an enemy retaliation from an attack knowing your Guard dog will kill it if you don’t. Reactive damage or horror prevention cards can be held back while you test at base skill on appropriate encounter checks. Much like above, if you pass you keep the card for next time and saving the need to boost. If you are hedging with something like “Ive Had Worse” you may even be pushing for the fail to get those free pennies!

Mystic have several cancel and token mitigation effects which operate in a similar manner to a hedge. They even have entire archetypes built around these, but you will have to read the mystics article if you want to know more about their other nuances.

Hi everyone! This is Pepe from Archivos de Arkham. I just wanted to again thank Andy, a.k.a. StartWithTheName for collaborating with us and urge you to check everything he’s got on ArkhamDB. Also, if you’re curious about how a deck that plays around with hedging would look, I encourage you to peep Andy’s Blunder Woman deck. It’s a blast to play Stella this way, so feel free to try!

2 thoughts on “An Anatomy of Chaos – Hedging”