This is the first article in a series explaining chaos bag mechanics, how they affect decision making, and fit into certain archetypes and strategies. My hope is to offer guidance and advice for new players and set out a simple conceptual framework for more experienced players looking for new and interesting ideas.

Getting Into The Zone 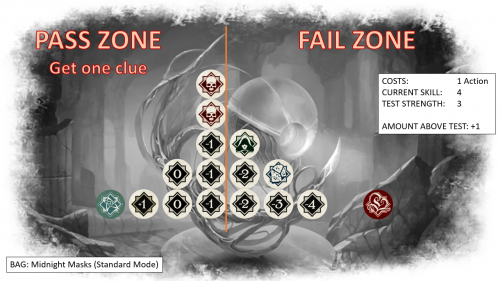 If we group the tokens by their current modifiers, and rank them from best to worst we can divide these into handy pass or fail zones depending how much higher/lower our skill is relative to test strength (For now, pretend symbol tokens don’t change, we`ll get to that later). Next, if we attach the benefits and repercussions of passing/failing to each zone it makes it easier to weigh up whether the risk is worth it. Here we have 9 out of 16 tokens (56% chance) to pass and get 1 clue, otherwise we have wasted an action. If you prefer percentages, a shortcut is to just treat each token as if its 5 or 6% since most bags are 16-20 tokens. It’s not exact, but its close enough to make decisions with. 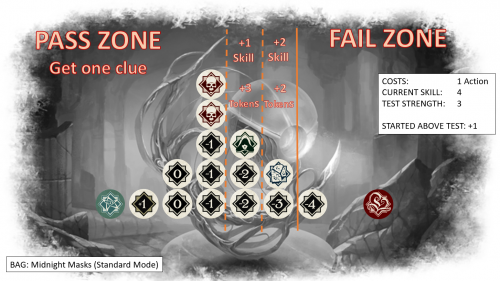 Boosting skill or lowering test strength, whether that’s by effect like a passive buff, or committing a card to the test or anything else, (usually) all move just move the pass line about changing different tokens from passes to fails. The number of tokens gained varies depending on how far above/below test strength we started. Here the first point covers 3 tokens (+19% of the bag), but the second gives 2 tokens (+12.5% of the bag). Notice that cumulative skill boosts usually give different rates of return per point of boost. Not all +1s are made equal. In fact the same +1 skill has different value depending on the test strength. 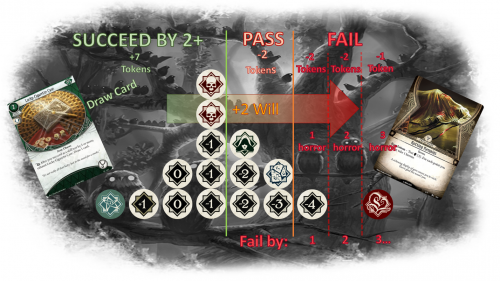 Where a test has different benefit or repercussions depending how much we pass or fail by, we basically get multiple zones and each skill boost we add will move all zones to the right and offers varying returns on each. 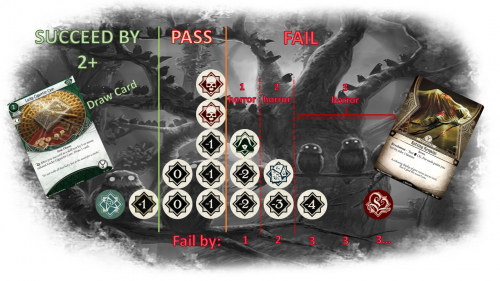 The right most fail zone often covers several columns of tokens since auto-fails and modifiers which reduce our skill below zero instead set our modified skill to zero. This incidentally also makes it impossible to fail by more than the tests strength. 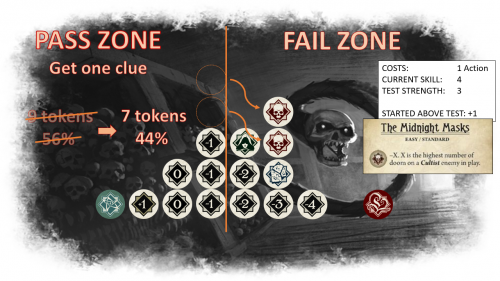 Symbol tokens change how the bag operates between and during scenarios. Some tokens, usually skulls, change value during a game by escalating based on game state or toggling between two values, so we have to keep an eye on them moving in and out of our targeted zone(s). These are usually (not always) higher towards the end of the scenario giving an advantage to faster decks who don’t spend as many early actions setting up assets. Which means that if we are playing a fast deck we need a plan to shift up a gear late game, or if we are playing an asset heavy deck, we need to target a higher base skill if we are likely to miss out on the early game advantage. 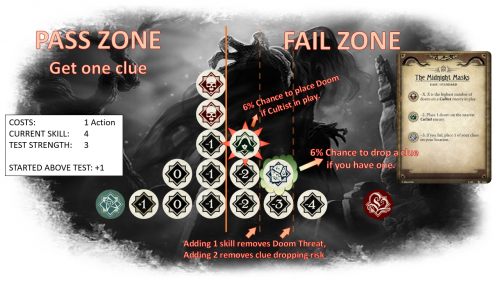 Some symbol tokens will add a small chance of additional repercussions. Where these are not subject to the test passing/failing, they simply add a small risk to all tests. Where they depend on passing/failing after being drawn, they incentivise us to cover certain values above test strength. These are sometimes worse when drawn on tests with specified criteria, like an attack against a named boss, making tests against that enemy riskier than others. 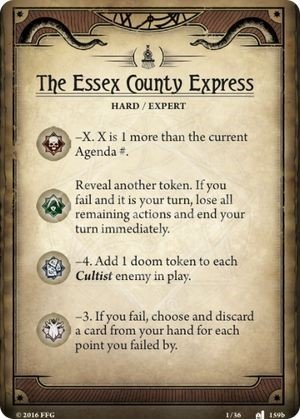 Tokens which cause us to reveal another token and apply an extra effect do not change our odds on passing unless they also apply a modifier. If they don’t, you can simply calculate your pass odds as if the token was not part of the bag. If they apply a modifier, then just consider proportion of the rest of the bag would be passes/fails. In case that the vast majority would then pass or fail treat it as a pass/fail token respectively. If it is hard to call, count it as being half a token in each.

To show why would take a lot of maths, but while this is ofc not strictly accurate odds, the error is so small as to be negligible while there aren’t too many other tokens in the bag which reveal more tokens. In principal this should also apply to the recently announced upcoming blessed/cursed token mechanic, but I wont go into it as FFG have hinted at other interactions with these tokens, so suspect there will be more to it.

Covering the top end of the bag can get quite costly and outside of specific archetypes, those last few skill points usually have heavily diminished returns and need us to forgo increasingly important things to reach them. How high we want to go also depends heavily on the benefits and repercussions of passing/failing, and a huge part of the game is striking the right balance.

Most players I know intuitively settled on targeting about 75-85% of the bag for most tests. This is usually the point at which each skill point would only cover 1 or 2 more token(s). If the benefits or repercussions of the test are particularly high we might go a point or two higher. If they are low then we might just go with whatever our unadjusted stats are, or deliberately tank the test for some other benefit.

How much higher/lower is really a judgement call, and as you play more you will get a feel for when the ~80% rule feels to high or too low. This is your intuition developing. Trust it. The more you play the better you will get at this.

While this target feels somewhat arbitrary, it may have a mathematical basis that we have simply converged on. Most tests cost an action to initiate and, in early campaigns, there was often 1 skill difference between 50-60% pass rates and 75-80%s. Since testing twice at 50%, gives a 75% chance of getting at least 1 pass, whatever we forgo to cover the token was usually not as valuable as the action saved making the long run trade-off worthwhile under most circumstances.

When planning our decks we may not know the upcoming bag composition, not least because it changes during and between scenarios. So instead we build our decks around a few rules of thumb, then just keep a bit of flexibility in the deck so we can adapt on the day.

So far at the start of a standard mode campaign, 75-85% of the bag, or rather the point at which we start to cover just 1 more token, is usually 2 above test. On hard this has been 3 or 4 depending on the campaign. We also need to plan for symbol tokens shifting up about 1 point during the actual scenario, and towards the end of each campaign the bag itself usually goes up a further 1 point through various means.

Since most tests are 2-4 strength, one easy way to do this is to plan your deck to be able to hit equivalent to (3 + 2 =) 5 in a stat early game and 6 late game, with something that can bump it up a point or two in a pinch to cover strength 4 tests. If we do the bumping with something wild we can then cover several stats at once without taking up too many deck slots. If we expect to use the stat a lot, such as a dedicated clue gatherer or combatant, we might want to aim for 6 and 7 above respectively and save on those one-off bursts.

Any stat that you are not covering, you want to consider either a way of simply tanking the fail effects or compensating for it in another way. So for example, if you can’t pass intellect tests, bringing some other way to get clues. If you have low will, perhaps bring extra sanity soaks since will check encounter cards are a common source of horror, or similarly more health if you have low agility.

Just to reiterate, this is just one method of many. Its just a good place to start when you are new and this is all just a baseline and a ballpark. There is a lot more nuance in the game that change how the bag operates and you may want to also read the other articles on a few of the common archetypes that manipulate the paradigm.

2 thoughts on “An Anatomy of Chaos” 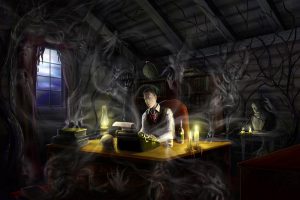